Many thanks to Mrs Morgan who bakes our cookies for tuck shop every Tuesday. On Halloween they took the shape of pumpkins. They are a real treat and a huge hit with the children. A recent vote by the school council said that most children preferred this new format for tuck shop as it reduced plastic waste, cost less and are very tasty. Money raised will be spent by the School Council on projects of their choosing. 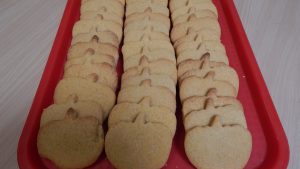 Leon and the Place Between – whole school book

​The week was kicked started by a visit from #bigtopmania who performed for the school and delivered workshops to all year groups.

Teachers then planned engaging lessons in art, English, Maths and Science linked to the story. A truly enjoyable week in school was had by all.

Please listen to the song belong, adapted by Miss Seymour.

Competition winners and some of the other amazing eggs 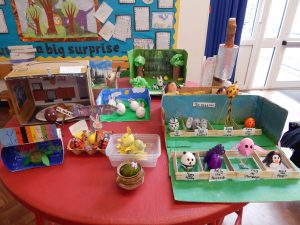 Once a week  we are joined by ‘Poppy’ our Pet Therapy dog. She loves to hear children read and will sit quietly whilst they share a story with her. Here she is showing off her Christmas jumper.

The school choir, led by Ms Seymour and Mrs Arthers, performed alongside 7,500 other children at London’s O2 Arena. They sang tracks including You’re the Voice, Birdhouse in your soul, Maliswe and Ain’t No Mountain High Enough. What an incredible experience for all taking part.

Two teams represented the school on Friday 27th January, in the first of three evenings, as they took part in the oldest chess cup in Herts. Well done to all of the twelve players as we won three out of our four matches.

What a super event this was this year. Competing in our third Chess Classic the twenty children that represented the school did us proud. The day began with a training session with a chess teacher pupils then took part in a simultaneous game. Following that pupils were treated to a demonstration game with Laurence Trent and Chris Ward. The afternoon consisted of five games for the pupils as they played children in their own year group in a Swiss tournament. Our medal hall increased this year with a first place gold for Theo, silver for Shreya and three third place bronzes for Clayton, Gursimar and Toby. The school missed out on a cup for third place by just two points. As always the children represented the school wonderfully. I can’t wait for 2017’s London Chess Classic trip. Mrs O’Neill

The first Arnett Hills Bake Off. We were visited by Paul and Mary who judged our first ‘Bake Off’. Well done to the winners year 4.

We were visited by DHL and they taught us all about truck safety. There are thousands of trucks on the road and it is important that we know how to behave around them safely.

The end of another amazing year at Arnett Hills.

Our summer performance, based on the book Matilda, was as always an amazing spectacle. The children performed brilliantly.

What a strange week it’s been. On return to school after the bank holiday weekend children were amazed to discover a giant egg had been laid in school. Watch the news reports to find out more.

Another celebration recently took part in school. The choir performed a selection of the songs that they have been learning at choir, on a Thursday morning, to an eager audience.

Where do we go from here

What a wonderful end of term treat we had on Friday 10th July, as our two groups of cheerleaders performed their routines to a packed hall. The smiles were testimony to the obvious enjoyment of the dancers and the rapturous applause clearly demonstrated the delight of the audience. We look forward to next year’s routines.

Wednesday saw the second school intra-chess tournament. Everyone played superbly well and showed great sportsmanship. There were some very tense moments and some very close games. We would like to extend our thanks to Mr Duncan for his continued support by running our chess club. We look forward to seeing more players in the new term. Well done to Theo, Toby and Melissa for winning their year groups.

The Wizard of Oz

WOW. What a show! Our end of year key stage 2 show has thrilled audiences for the past week. The considerable hard work in learning lines that the year sixes had to put in and the energy of all year groups in singing and dancing was incredible. Parents and staff were moved to tears as the cast beautifully sang their final song ‘Somewhere over the Rainbow’. It really was a team effort, so thank you to all staff, all parents and every child that took part.

On Friday 6th May, the school was delighted to find out that Gursimar from Year 3 had won the competition to design a seed from space that we had completed for BRITISH SCIENCE WEEK!

As a prize for winning this, she won a mini greenhouse, vouchers for garden essentials and a range of different packets of “alien seeds”.

A big congratulations to her and her imaginative, creative, winning seed!

What a delight! The children and parents were treated to a wonderful assembly, showcasing the talent of our violin players and playing a range of different tunes. A huge thanks to Mrs Giles for preparing the children for us and for your weekly lessons.

We were all treated to poems and songs, performed by different year groups. The children saw the display of food items kindly donated by their families. These will soon be distributed by our Year 6 pupils as gifts to our neighbours at The Bucklands.

Joshua in Year 6 chose and read a poem for us entitled ‘It’s Autumn Again’ by Andrea Rieck. Please listen to this moving rendition below.

Year 1 shared art work inspired by Still Life With Apples by Paul Cezanne and entertained us with as song about a scarecrow. We rocked and rolled to year 2’s harvest song, and shared poems from Year 3, 4 and 5.

To close our assembly Year 6 sang us out beautifully with ‘Harvest for the World’, recorded for you below.

Many thanks to all of the children and staff for a truly, lovely assembly.

The installation of our Bug Hotel

At Arnett Hills we have a duty to prepare our children for life in modern Britain and to keep them safe.

We  work with families to maximise their children’s potential and to ensure high standards of achievement in a supportive, safe and caring environment.

We aim to provide all the children with equal access to a broad and balanced curriculum, which caters for their intellectual, physical, social, emotional, moral and spiritual development.

At Arnett Hills we have a thriving and wide variety of Club and after school activities for all of our pupils.

Please visit our Clubs page for more information on the individual activities and how to join.